you will never see the invisible so clearly 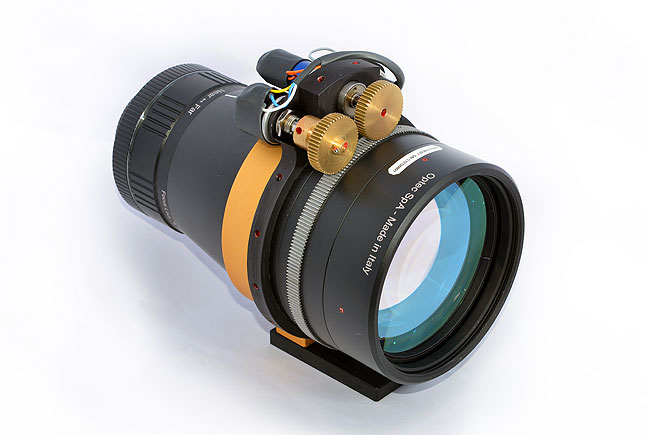 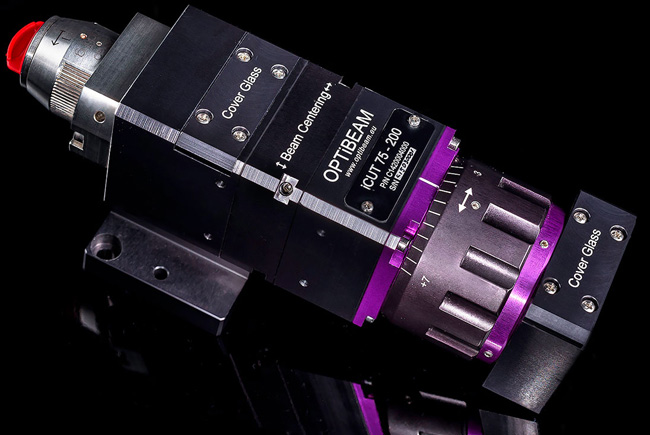 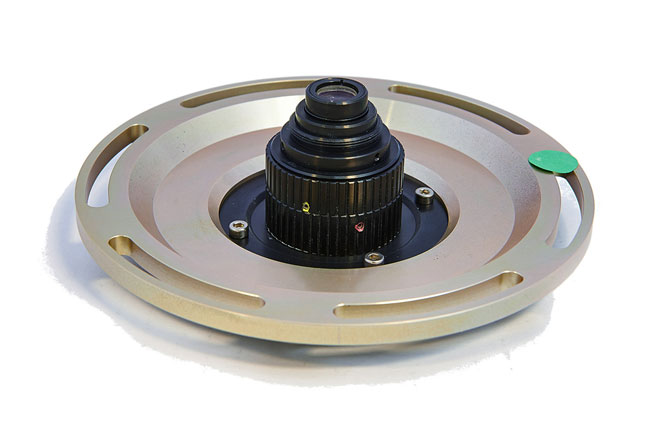 X-RAY
Product
Diagnostic Digital Imaging is now the main technology used for medical application: Radiological imaging systems have developed, in close parallel with X-RAY image intensifiers, lens systems to transfer the image from this image intensifier to Camera Devices.
SEE MORE
SPACE
Product
It has been several years that Optec is working in International space programs. It all started in 1992 with innovative optical system developed for the Spacelab, Mission D2, designed to be used on the Advanced Fluid Physics Module (AFPM) experiment.
SEE MORE 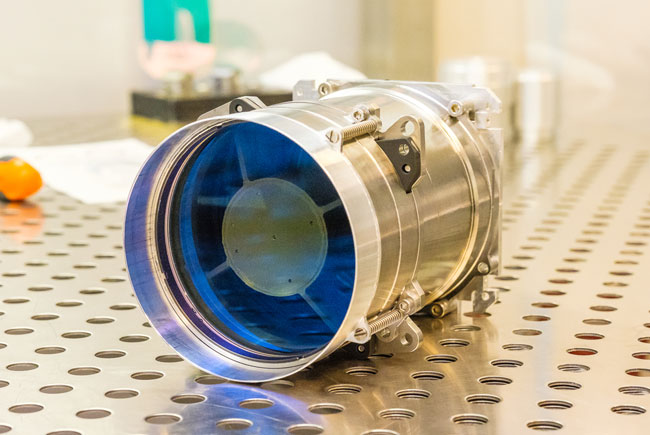 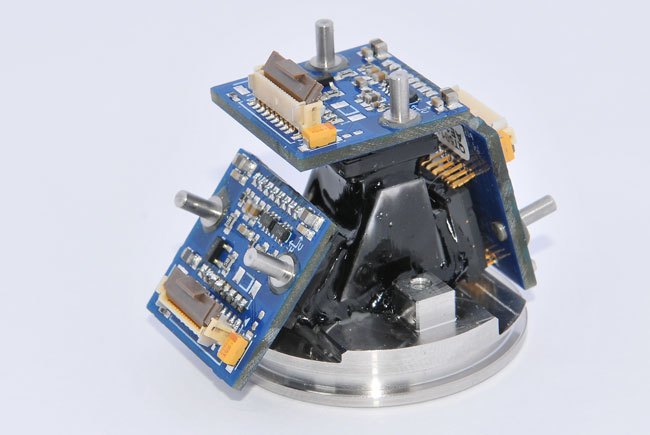 As the US market is crucial for our business, we have recently decided to open a subsidiary based in Los Angeles (Optec America Inc.), in order to better monitor and follow our customers in the U.S.  Optec America Inc. will directly interface with U.S. customers to supply products from Optec S.p.A.

It also will provide our U.S. Agency Companies and customers the possibility to avoid any constraints and limitations in managing projects which fall under the control of the U.S.

One of the most crucial part of our business negotiations is an upfront, clear understanding of the customer’s requirements and putting the agreed-upon specifications in writing.  These negotiations can take months to assess the client’s needs, with numerous technical consultations.  For this we require Mr. Musazzi as a very skilled employee with specialized knowledge in our products and their capabilities vis-à-vis the customer’s needs.  To ensure complete comprehension, we cannot risk that any detail is lost and we must have our customer’s confidence and trust.  This is accomplished with face-to-face meetings.  .

Once a precise understanding of the customer’s needs is apprehended, then a contract is reached.  The contract must be clear on technical specifications for our optical designers in Italy, who will design the desired custom product or system.  A prototype will be produced in Italy, tested by us and shipped to the U.S. for testing under “real life” conditions.  Optec America will liaise between the U.S. customer as the prototype is created and tested, and it will track the successful shipment from Italy.  Once final specifications are made after testing, then the final product is manufactured.  When delivered, Optec America will go to the customer’s site and conduct installation and/or provide technical oversight and troubleshooting.

Optec provides to its customers a variety of consulting services, such as: 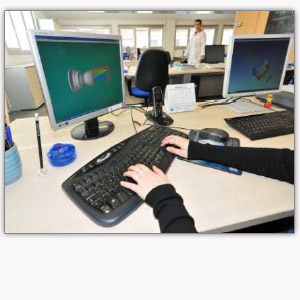 Optec uses two different software in order to have a double feedback during the design phase. From the collaboration between the optical departments and computer programmers CAOD (Computer Aided Optical Design) named Horus was born, which was developed in-house, capable to interface to other programs to perform arithmetic functions, optimization, simulation and analysis specifically dedicated to optical systems. HORUS is the result of the significant experiences that Optec made over the years in the optical and computing fields. An optical design software most widely used, Zemax (currently used in EE Professional 2013 version) has been accompanied to HORUS for the last ten years. Zemax 13 is able to simulate many optical systems, such as standard lenses, telescopes, microscopes, fiber optics, laser cavity, prisms, beam-splitters and many other applications of optical technology. A rich set of functions is able to analyze and optimize complex systems composed of a large number of surfaces, simulating manufacturing tolerances, assembly, and more. 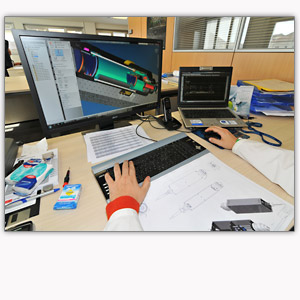 Optec uses the whole Autodesk package: starting from Autocad 2D, where the first few feasibility studies occur to switch to Autodesk Inventor 3D for design final. The finalization of the system occurs with a detailed analysis using Finite Element software Autodesk ® Simulation. The software provides a range of mechanical simulation tools that help Optec engineers to take decisions during the trial phase of the design process. The software supports multiple CAD environments and tools for modeling large finite elements with the aim of helping to correctly define the design criteria and to accurately predict product performance. Optec uses Autodesk ® Multiphysics Simulation Software to validate and optimize designs before manufacturing, increasing efficiency, minimizing the need for physical prototypes, reducing costs and errors. 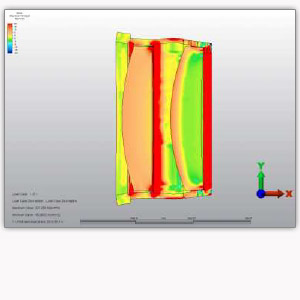 Optec uses Autodesk® Simulation Multiphysics that allows to deeply analyze the static and non.-static characteristics of the product. Optec is able to furnish finite element analyses that allow the study of mechanical stress of the materials (static, dinamic, linear, non-linear, vibration, etc.). Structural analysis and reports can be furnished. The versatility and computing power of software Autodesk® allows to Optec engineers to furnish detailed physical data starting from the boundary conditions sent by the customer. In addition, Optec is able to analyze the result not only from a mechanical and structural point of view, but also from an optical point of view. 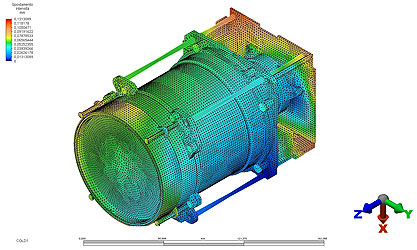 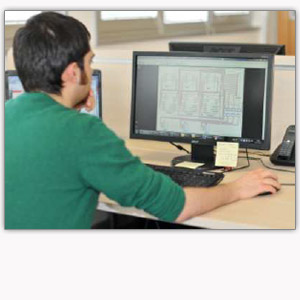 Optec uses the entire package OrCAD and PSpice to manage all phases of the engineering process. Starting from drawings made in OrCAD Capture it's possible to obtain accurate and detailed simulations of the behavior of electronic systems. In this way, it is possible to test virtually every circuit in various conditions of operation up to the limits of stability in order to ensure always reliable and efficient systems for each type of application. To close the whole design phase, through the package OrCAD is also implemented the circuits on a PCB in order to have compact and optimized layout. 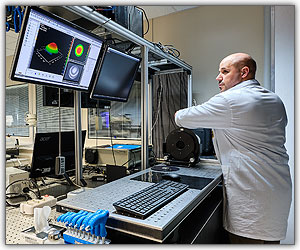 Optec is able to assist customers in quality testing of optical components and systems.

In this area Optec has produced outstanding results in the past (particularly testing in its Optical laboratory and ISO5 cleaning the OGSE for Sentinel V, the METIS project, part of the ESA mission called Solar Orbiter, and others) and is still active with advanced research.

In the course of the years the laboratory has constituted a patrimony of resources that regard in particular the absolute measurement of the geometrical form (plano and spherical surfaces), the WFE and MTF of complete optical systems, transmissivity and reflectivity efficiency on planar surfaces, focal length measurement, developing competences and maintaining operative capabilities to the state of the art.

With the aim of giving value to the resources owned and making them available to industries and institutions, Optec has constituted metrology rooms (in ISO5 cleaning room or standard evironmnet) accessible to external users and available.

The instrumentations available at OPTC laboratories include: 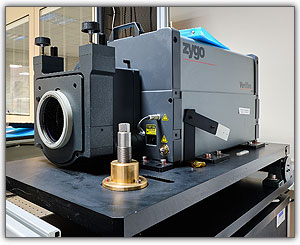 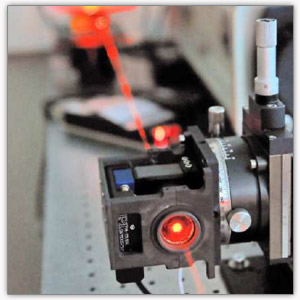 Straylight analyses are standard in the following application fields: 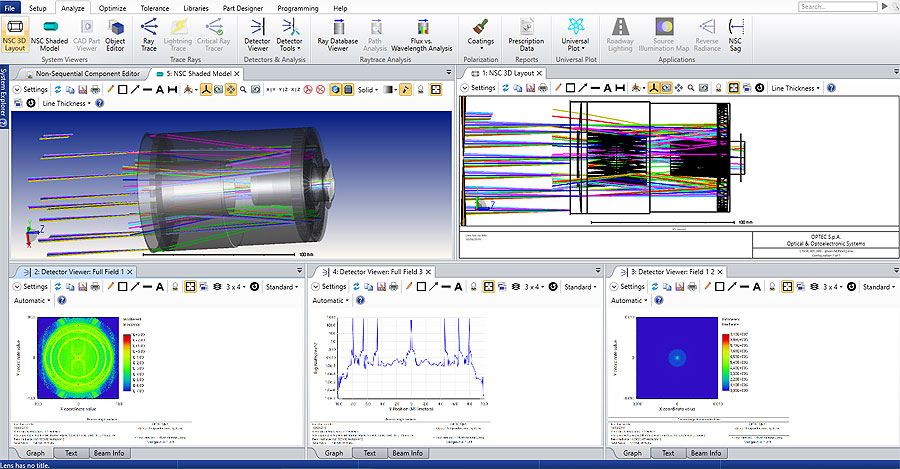 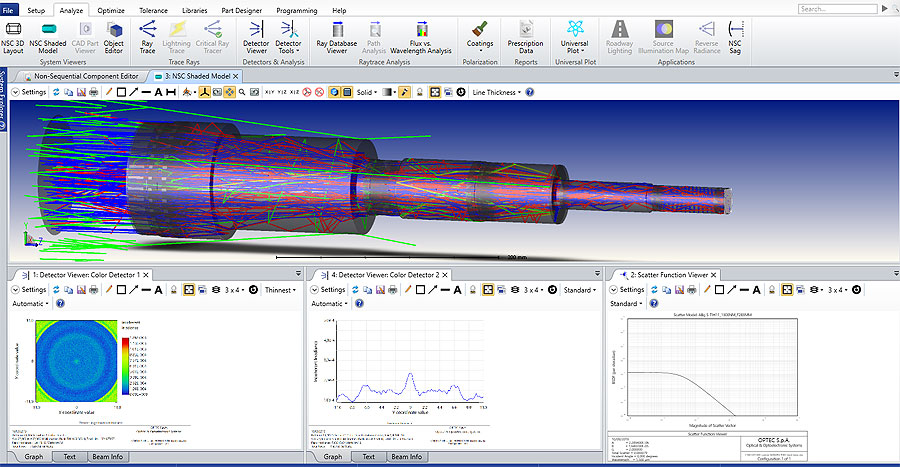 Optec has improved its optical optimization and analysis capabilities acquiring two new software: CodeV and LightTools.
CodeV is worldwide known as the best software for optical optimization and analysis, while LightTools represents one of the best and most sensitive software for straylight and ghost analysis.
Both the software will be used from R&D department together with Zemax (maybe the most diffuse optical software) and Horus, that is a internally developed software.
Optec is constantly trying to improve its skills and capabilities in order to satisfy the arising requests of excellence from the customer.

Optec in the world

We will reply as soon as possible.